He counts Elton John and Eric Clapton as fans.

He enjoys huge success on both sides of the Atlantic.

He’s one of the biggest male pop stars alive.

And he does it all seemingly effortlessly.

Of course, that’s the huge secret of Ed Sheeran’s success:

He makes it all look so easy, but in reality, friends say he works harder than anyone in the business.

Read on for 3 ways you can be inspired by Ed Sheeran to reach your own pinnacle of singing awesomeness. How “easy” you make it look is up to you.

Frequent collaborator Ryan Tedder, of OneRepublic, relates Sheeran's success to Malcolm Gladwell's theory that it takes at least 10,000 hours of hard work to become a genius in a given field.

Tedder shares: "Ed said to me, 'Look, all things considered, you and I both know people that are more talented than us, but you know what they say about 10,000 hours? How many guys do you know that have put in 30,000?'

Tedder concludes: “There aren't a lot of us. We both are obsessed."

This “obsession” may account for the night-and-day difference we hear in Sheeran’s early attempts, and where he is now.

While revealing a painfully bad early recording on the Jonathan Ross show, Sheeran states: “When people say artists are born with natural talent...no...you have to really learn and really practice…”

This is great news for anyone just starting out! Don’t assume where you are now, is where you’ll end up. With consistent hard work, anything is possible.

One of the things that makes Sheeran so engaging, is the fact that he doesn’t pigeonhole himself as an artist. His music incorporates elements of many different genres: rap, folk, soul, and of course his signature swooning love songs.

This variety isn’t only found in the types of music he creates, but his vocal performance. Ed has a lot of fun playing with his singing voice, sometimes creating a medley of different sounds within the same song.

Take his U2-style Castle on the Hill. There’s the gravelly edge to “I miss the way you make me feel…”, the raw barking sound when he shouts “...castle on the hill...”, and clear falsetto tones on the “oohs” layered over the chorus. These musical choices create a sound landscape as varied and dramatic as the English countryside he sings about.

His dynamism comes from the fact that he makes music “not for the critics, but for the fans”. He makes the music he wants to make. And on that note...

It’s no secret Ed Sheeran doesn’t fit the typical popstar mode. Rather than being a slick, flawless performer, he has the aura of a sidewalk busker who just made it very, very big.

Playing alone with his guitar and loop pedal, even in front of stadiums, Sheeran is able to retain creative control and keep the excitement and vitality that come with a lightly-produced show.

In an interview with the BBC, Sheeran explains his decision to stay close to his roots: "When you've got a band and it's quite rehearsed, it can get quite monotonous night after night.

"Whereas with a loop pedal, you're on edge the whole time because it might go wrong in front of 87,000 people - so it makes it more exciting."

Being unafraid to “go wrong” is a huge part of his appeal. He doesn’t try to please everyone. He spoke to Radio X about his philosophy: “Why...would I care about someone I’ve never met who I don’t know their opinion and I don’t know them as people. But I do know that my heroes like my music, so I don’t care If I’m credible or not, because in their world I am and that makes me credible in my world.”

So there you go:

Instead of wasting time worrying over his “credibility”, Sheeran puts his focus on making music he loves. And as the winner of two Grammy Awards, with many more nominations under his belt, it seems this form of credibility is working out for him. 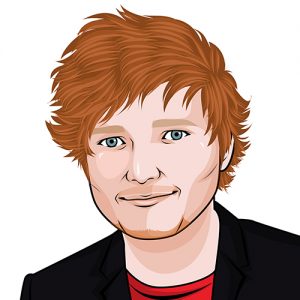 Sheeran claims to have put in 30,000 hours practicing and performing music...how do you match up?

It might seem like it’s easy for him: after all, he is a professional musician, and can spend all day making music. But this wasn’t always the case.

What time do you have in your day to work on your singing? Remember that even little chunks of time, when added up, can make a big impact.

A good place to start is aiming to work at your singing for at least 20 minutes, every day. This might not sound like much, but if you’re not doing this already, and you start practicing consistently, you will notice a huge improvement in the strength and endurance of your voice.

Not sure where to start? Begin by warming up your voice everyday for your healthiest singing ever, and move on to exploring these vocal exercises.

Are you unclear as to exactly what sorts of sounds you’d like to bring to your singing? Begin the hunt for inspiration! Listen to a wide variety of music: perhaps some you normally wouldn’t consider, to find new sounds.

Take a lesson from Ed Sheeran: he’s mostly known for his folk-pop sound, but he also brings in hip-hop elements, and on occasion, raps! Perhaps this goes back to his early days rapping along to Eminem: He credits The Marshall Mathers LP for helping him overcome a debilitating stutter.

So look back at your own musical history: what elements can you pull from your lifetime that could contribute to a unique sound?

In your quest for inspiration, never become so focused on others that you lose your own authenticity.

After all, that’s what makes us fall in love with artists: we see something in them that reflects our experiences.

Ed Sheeran is casual, passionate, fun-loving. Rolling Stone perhaps summed it up best when they labeled him “Pop’s Hardcore Troubadour”.

That’s Ed Sheeran: what about you? What elements of your personality can you share with the world? Never be so focused on “making it” that you lose sight of what drew you to music in the first place: an intensely personal way of expressing yourself.

Practical Tips to be as Awesome as Ed Sheeran

Ed Sheeran is so inspiring, with his diverse catalogue and infectious authenticity. It’s fun to listen to him, but it may leave you wondering: how do I get from Point A to Point B?

First things first: get your 10,000 hours. And then start working on your 30,000. Remember how Sheeran claims there are plenty of people out there more talented than he is, but he’s the hardest working? Hard work wins out over raw talent any day.

Getting vocal lessons is a great way to begin logging those hours. Having a voice teacher on your team means you have a level of accountability: not only are you singing every week in your lesson, but you are spending time practicing between lessons: running vocal exercises and learning new material.

No clue how to find a voice teacher?

Thankfully, this is the future, and finding a voice teacher is as easy as clicking here. Not only are trained vocal professionals just a click away, you can actually complete your lessons online. This is a great option for time-starved artists striving for their 10,000 hours. You can use your hours singing, not stuck in traffic on your way to a lesson.

Whether you choose to work with a voice teacher or not, commit to making singing a regular part of our routine. Explore the Voices Inc Blog for even more inspiration on how to take your singing to the next level.

Bonus Tip: Work as Hard as Ed Sheeran... and Have as Much Fun, Too!

We know that Ed Sheeran works harder than practically anyone in the business. So how does he make it look so easy?

Simple: he’s having fun while he’s doing it.

“Fun” sort of sums up all three of these tips:

Logging your 10,000 hours? Easy when you’re having fun doing it.

Becoming a dynamic performer? Second nature when you treat all of music as your own personal playground.

And being authentic? Staying true to yourself is the surest way of having a great time.

Because if you’re really looking for the #1 tip to imitating Ed Sheeran, this is it:

Work hard, make great music, and have a blast doing it.

Soon, you’ll have people wondering how you make it look so easy.