Guitar strings are a pretty interesting component of any modern guitar.

Not only are they necessary for your instrument to even work at all, but a set of strings can have a pretty significant impact on the tone you will get from a guitar.

This is especially true if you are playing acoustic guitar.

There are so many different types and gauges of strings on the market. So much so that it’s pretty easy to get overwhelmed by the selection.

Because of that, I have decided to show you the top 3 brands of guitar strings.

As I give a quick overview of the brands, I will also highlight some of their best string sets.

For the most part, these will be models whose quality and performance has been proven countless times by now.

With that said, let’s jump right in.

Ernie Ball is one of the oldest and most popular guitar string brands on the market today.

Their presence is definitely felt a lot more in the electric guitar community than elsewhere. If you are not sure which strings to get for your electric guitar, picking up just about any Ernie Ball set will give you excellent results.

However, if I had to pick a single set that really stands out, it would be the Ernie Ball Regular Slinky Nickel Wound set. 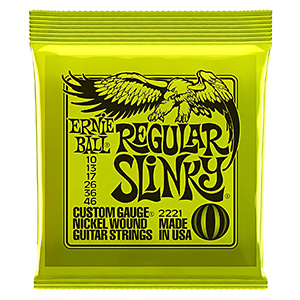 Ernie Ball’s regular Slinky strings have been the staple of rock and metal music for decades.

Anyone from Metallica to Eric Clapton has been using them. Yes, this model is that old.

However, they are still one of the best sets you can get at this moment.

A regular set of Slinky strings means that you are getting a 46 gauge set.

With a hex core made of carbon steel and a precision would nickel plated steel on the outside, Ernie Ball Slinky will last you as long as you need them to, all while retaining great tone and performance.

If you thought Ernie Ball had a long legacy, wait until you hear about D'Addario.

This company has existed in one form or another for several centuries, doing nothing else but making strings for instruments.

They started making guitar strings at the beginning of 20th century when the members of the family moved from their small town in Italy, to the United States.

Today, they are one of the largest string manufacturers in the world.

Centuries of experience and refusal to accept compromise has allowed D'Addario to come on top as leaders in the industry. Their strings are high-quality products which you can definitely trust.

I'm going to show you two great sets made for electric guitars and one made for acoustics. 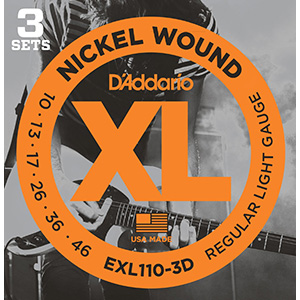 D'Addario's EXL 110-3D is among the most popular electric guitar string sets, and by far their best offering in this segment.

These use a steel core with a nickel-plated steel wound on top.

What makes them so great is their tone.

You are looking at a very bright sound right out of the box, combined with a very versatile nature.

In other words, you can use this set for whatever genre of music you are playing. They will keep up with you just fine.

Their NY series are a bit more expensive, but with a perfectly good reason.

They used a pretty unique high carbon steel alloy for this set, which brings increased reliability and durability.

You will have to put the NY series through quite a lot before they give up on you. On top of that, their ability to retain a stable tuning is much better than what other sets can offer.

Overall, this is a great set for those who don't want to change strings too often. 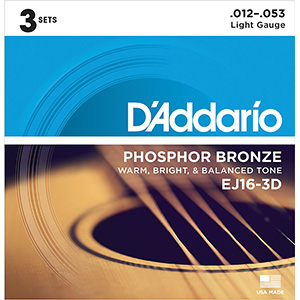 When it comes to acoustic guitar strings, D'Addario's EJ16-3D phosphorus bronze is the way to go.

This set is known for its incredible tone definition and brightness. With that said, the level of warmth you get with them is just impressive.

D'Addario has coated these with EXP, which prevents the onset of corrosion and thus expands their lifetime quite significantly. However, this is an optional feature.

The world of acoustic guitars wouldn't be the same without Elixir.

This brand has contributed so much to the acoustic side of the family, which has allowed them to push through straight to the top of the industry.

If you are in need of a good set of acoustic guitar strings, I strongly suggest that you check out what Elixir has to offer before going elsewhere. 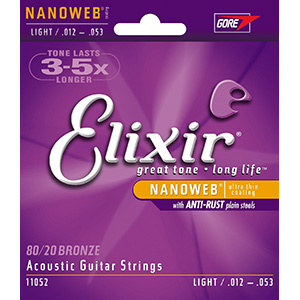 This set is both one of their most standard offerings and among the best acoustic guitar string sets in the world.

It comes in a variety of gauges, allowing you to select the one you prefer.

Elixir has used their famous 80/20 bronze wrap wire, which is what gives them an incredibly warm tone.

A cool thing about Elixir is that they coat most of their strings with what they call Nanoweb technology. In other words, it is a protective coating that prevents corrosion and extends the lifespan of the strings.

Unlike many other brands out there, Elixir offers this feature as standard.

Trial and Error is Sometimes Needed

Finding the right string set for your guitar is a process that takes both a lot of time as well as experimentation.

You just have to try out a few different options to figure out what works and what doesn't.

The brands I have mentioned today have proven their worth countless times by now.

You can pick just about anything they offer and you won't be disappointed.

With that said, I strongly suggest you take a look the models discussed above.