If you’re reading this, you’re probably an avid guitar player.

You love the sound and the feel of a guitar.

However, I’m guessing you’re here because you want to mix things up and try a new instrument. Namely, the ukulele.

While this may have seemed like a simple choice in the beginning, now you probably have more questions than answers.

How can you find the right ukulele for you and your style?

Today, we’re going to discuss how you can find the best ukulele for guitar players, and some specific examples of ukuleles that I know you’ll love.

Let’s get you closer to your new instrument!

What Major Differences Do Guitar Players Need to Consider?

For a guitar player who is looking to buy a ukulele, it’s important to know the differences that you’ll see between the two instruments.

Ukuleles, as you’re probably aware, are not just small guitars.

They have their own unique sound and style, as well as several differences in their characteristics. 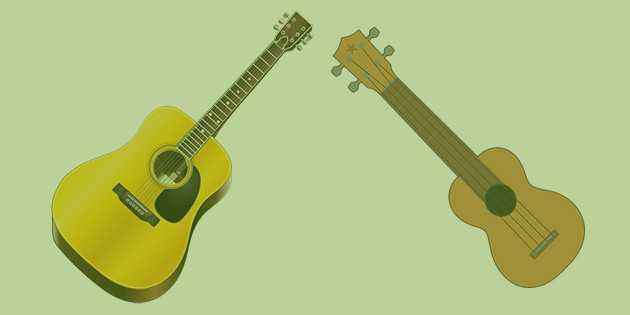 The main differences are in the strings, tuning, frets, and fretboard.

Ukuleles typically have 4 strings, as opposed to 6. Due to this fact, ukulele tuning is different as well: normally you’ll see a GCEA tuning.

As a result of these two points, the positioning of the chords is different on a ukulele than on a guitar. However, for avid guitar players, picking up the new chord positions won’t be a difficult process.

The only time these points differ is with the baritone ukulele (we’ll talk more about that below). These have a tuning of DGBE, just like the four highest strings of the guitar.

Another difference you’ll notice when playing the ukulele is that the frets are much smaller, and the fretboard is shorter. However, while you might not have the same range as a guitar, the ukulele’s unique sound still finds plenty of room to flex in this space.

What Guitar Players Should Look for in Ukuleles

If you’re already a guitar player, there are some points that you will want to consider when choosing a ukulele:

The smaller ukuleles tend to have a very thin fretboard.

While this does give your hands room to flex, it can make it somewhat difficult to reach those tighter chords.

That’s why I recommend that guitar players look for ukuleles with somewhat larger necks, as this will be closer to what you’re already accustomed to with the neck of the guitar.

Number of Frets/Range of Notes

The average guitar will have somewhere between 22 to 24 frets.

The smaller sized ukuleles will have around 12 to 15 frets, while larger ukes will have up to 20 or more frets.

As we mentioned before, most ukuleles are tuned differently from the guitar, meaning that all of the chord positions are changed.

While it’s not extremely difficult for guitar players to learn the new chord positions, some may understandably want to avoid that hassle.

In that case, guitar players would want to look for baritone ukuleles, which are tuned the same as the last 4 strings of the guitar.

When playing a baritone ukulele, you can simply follow the same chord positions as the guitar, paying attention to the four highest strings only (DGBE).

If you’re already used to playing a full-sized guitar, holding a ukulele might seem somewhat awkward in the beginning.

However, some of the larger ukuleles fit with the contours of your body like a guitar does.

Obviously, the sound of a ukulele is much different than that of a guitar.

The smaller ukuleles produce that very high, airy tone that we normally associate with ukulele songs (such as Israel Kamakawiwo’ole’s version of Somewhere Over the Rainbow).

Larger ukulele sizes offer a deeper sound tone that stretches closer to the guitar. Especially the baritone which has a deep, rich tone, and might be described as a miniature guitar more than a ukulele.

It’s pretty clear that any ukulele will be more portable than a guitar is.

However, the smaller the ukulele, the more portable it will be.

From smallest to largest, the 4 types of ukuleles are soprano, concert, tenor, and baritone.

For guitar players, the soprano and concert will likely be too small to handle, and will not produce the sound that you’re looking for.

These two types of ukuleles are great for beginners, but those who have experience playing guitar will easily master the larger ukulele types.

Which brings us to our top recommendations for guitar players:

The tenor is usually 26 in (66 cm) in length, and offers some great features for former guitar players.

With close to 20 frets on average, you’ll find a great range of notes to play.

Also, since the tenor is the second largest ukulele, you’ll find there’s a lot more room for your hands to move around the fretboard than with the smaller ukuleles.

The sound of the tenor is full and loud, but still manages to hold true to the classic ukulele sound that we love.

The baritone is the largest of the ukuleles, and is usually around 30 in (76 cm) in length.

Normally, baritones have 20 or more frets, easily reaching a similar range to the guitar. It features a deep, rich tone that strays away from the classic ukulele sound, and reaches closer to the sound of a guitar.

As we mentioned before, the tuning of the baritone is the same as the last four strings of the guitar (DGBE).

How to Choose the Best Ukulele for You

So, after considering these facts, how can you decide which type of ukulele is for you? Let’s discuss 4 points that might make all the difference.

If you’re a man who is used to playing the guitar, it would probably be better for you to stick with the baritone.

The size will adapt better to your hands, allowing you to have full range of motion when playing even those tighter chords.

If you have average or smaller hands, the tenor would be a good option for you. However, those with smaller hands who are used to stretching on the guitar can still make the baritone work for them.

This may be one of the most important points in choosing a ukulele for guitar players.

How would you define your style, the type of music that you enjoy and want to play? How will that style of music sound with the high, airy tones of the ukulele?

Remember, the tenor still maintains that sweet, tropical sound that we normally associate with the ukulele. Although it does have a better range than the small ukes, it is not a replacement for the guitar. If you’re looking to explore this sound, the tenor is a fantastic option for you.

However, if you want to stick closer to the sound and style of the guitar, you’ll probably want to get a baritone.

As we mentioned, tenors (along with the smaller ukulele types) are tuned at GCEA, which means that guitar players will need to re-learn chord positioning in order to play them.

Consider whether you’re willing to put the effort in to do that.

If you’re looking to purchase an instrument that you can play as soon as you pick it up, I’d recommend the baritone. However, if you’re open to spending some time learning the new chords, the tenor is for you!

Where You Want to Play

If you’re looking for an instrument that is ultra-portable, you’re better off with the tenor.

It is the smallest ukulele that is still a viable option for guitar players, and is very easy to carry around.

Baritones, while still more portable than the guitar, are a bit more clunky than the tenor.

For more detailed information on each model and their current sales prices, click through the buttons below:

This beautiful ukulele is made from Mahogany, with a natural satin finish.

It comes with Aquila Nylgut strings for the baritone.

It is made by a very reputable company in the world of both guitars and ukuleles.

This gorgeous baritone comes from the top brand of ukuleles in the world.

It features agathis wood (similar to Mahogany) and Rosewood for its build.

These woods help it to produce the warm, deep tones that the baritone is known for.

As the token tenor for our list, this ukulele is 26 inches long, and features Mahogany and Rosewood for its construction.

The body is laminate, making it less fragile than other ukuleles.

And the Winner Is...

Looking at our three options above, it’s easy to see that they’re all excellent quality ukuleles. However, which one really stands out from the crowd?

Obviously, as a guitar player, you’re concerned about the tone and quality of the ukulele, as well as how easy it will be for you to pick up and play.

Good quality woods like Mahogany are also an important point to remember, as well as the fret length.

Above, we’ve listed two baritones and one tenor. Of course, it will depend on your personal style which of these two types you prefer.

However, for guitar players looking to learn the ukulele, my best recommendation would be the Kala MK-B Baritone.

When you’re playing this ukulele, you won’t believe that you have such a beautiful instrument for such an affordable price!

With incredible quality built in to this ukulele, guitar players won’t be disappointed.

So what are you waiting for?

It’s time to starting learning your next instrument!

Amy Copadis is a freelance blogger whose love of music started at age 8 when she started taking piano and voice lessons. She has been playing the guitar for over 10 years, and most recently started to learn the ukulele!