We are all looking to create a better version of ourselves.

Yes, our imperfections and mannerisms are what moulds our unique characters and help us build our identities.

But anything that patches our flaws and makes us better at what we do is always welcome.

As a vocalist, there is absolutely no shame in getting a little help from technology to sound as polished as the stars you look up to.

Thankfully, with a vocal effects processor, you don’t have to pay an arm and a leg to sound just the way you want.

Today we are exploring vocal effects processors for live performances and recording.

Later I will also present a list of five of your best options at different price points.

What Does a Vocal Effects Processor Do?

A vocal effects processor is a digital device that add effects like echo, voice doubling, and reverb to enhance your vocals as you sing.

It lets you change the character of your vocals on the fly, with just the touch of a button. You can even make your voice sound like that of a child or a female/male.

The device also automatically corrects the pitch of your voice. Most have a harmonizer feature that adds pre-recorded, multiple-part harmonies and loops to lend depth and bulk to your vocals.

And the beauty of this is it all happens in real time, as you perform.

In fact, there is a lot you can do with these little babies

The device sits between your microphone using the XLR input and, through its own output and another XLR cable, relays the signal to the mixing board or PA system.

The voice signal is thus processed before it is transmitted to the PA system. The device helps you achieve that refined vocal quality you would normally only get in a studio recording environment.

Its greatest benefit is it allows you a way of perfecting your vocals in real-time, as you perform live.

If you are a solo performer, a vocal effects processor really is a Godsend. It is like having your backup singers and sound engineer all rolled up into one little device.

The only accusation you could shoot its way is it can make people who are terrible at singing start believing they could in fact have a career in music.

Then again, that’s perhaps not such a bad thing.

Who Needs a Vocal Effects Processor?

Any vocalist who performs live can find a vocal effects processor eminently useful.

Purists may turn their noses up at anything that digitally alters a singer’s voice. For some it even feels like cheating, though people like Cher and T-Pain might disagree.

But you can use a vocal effects processor without ever sounding robotic or too digital.

Again, unless a performance is intended to be 100 percent acoustic, almost all modern live performances now incorporate some level vocal effects processing.

By using a vocal effects processor you are essentially admitting that your voice could sound better.

Perhaps it is the pitch that you struggle to control. Or your voice could be flat and lacking that ‘thing’ to really make it pop.

Yes, some voices sound better than others. Some people are blessed that way. But the human voice is inherently imprecise.

Though it can be trained for perfect pitch, precise harmonies, and smooth note transitions, you can’t trust even your own voice to sound the same all the time.

Vocal Effects Processors are an Invaluable Tool On Stage

Voice processing is known by a lot of terms, like double tracking, voice doubling, the auto-tune effect, etc.

More accurately though, it is all this and other things.

It is, of course, not a new trend:

Even though T-Pain and Cher, with her wildly popular 1998 hit, Believe, have been credited with bringing the trend to life, people like Teddy Riley, Roger Troutman, Madonna, Daft Punk, and others all had considerable success with vocal effects.

But most of these artists have used vocal effects processing in the studio, which is easier as producers have all the time to clean and tweak the vocals.

On stage you just don’t have that much time, which is where a vocal effects processor is invaluable.

Features You Should Look for in a Vocal Effects Processor

There are many different vocal effects processors available today. Some emphasize specific features, like looping, pitch correction, and one or two actual effects like echo and reverb.

However, for this article we are concentrating on multiple effects processors, which bring all the aforementioned features into one compact processor.

There are some vocal processors that also support different instruments like guitar, harmonica, and piano as well as vocals.

But as you shop for a vocal effects processor there are some features you should insist on:

How Do You Prefer Your Vocal Effects Processor - Tabletop, Mountable, or Pedal?

Your choice depends on your live rig setup as well as whether you sing vocals and play an instrument simultaneously.

Tabletop vocal effects processors probably suit DJ’s and EDM performers better because they can just throw them onto their decks where they can reach them with ease as they perform.

For specialist vocal performers, a vocal effects processor you can mount on your mic stand and operate with your hands from a standing position will probably work best.

Pedals, popularly known as stompboxes, are a favorite for singers who also play guitars. They are very convenient as they allow you to multitask easily - singing and playing guitar, while also operating the effects processor with your foot.

However, you will need to be especially nimble with your feet if the stompbox has multiple footswitches.

There are great choices right through the price scale. The features and build quality, of course, get better as you move up the scale..

Remember though, all the effects processors reviewed below have far more features and effects combinations than we can run through here.

To accommodate all budgets, we will start with the low end models.

For such a low price, this Behringer Virtualizer 3D FX2000 has incredible value.

It basically has just the two effects - reverb and delay, though the delay is for guitar only. But these can be programmed with a wider range of FX combinations to produce hundreds of unique sounds.

In the end you get editable effects like reverb flanger, reverb echo, reverb chorus, pitch delay, tremolo delay, vocoder, resonator, and many others. You can preset these for storage and easier access.

The 3D FX2000 has so many complex effects combinations that less technically inclined users can find the learning curve to be rather steep.

From TC Electronics, one of the biggest names in the vocal effects processors’ businesses, this is a vocal effects pedal that you control with your feet.

This TC Helicon VoiceTone Harmony-G XT is an intelligent and incredibly versatile effects processor that can give your performance the effect of a full sized band of guitarists.

It lets you plug in both your guitar and vocal microphone, which gives it one of its greatest attributes - automatic harmony generation.

The processor recognizes guitar chords and automatically generates and plays realistic sounding harmonies following whatever you are playing on your guitar.

You can record and programme your harmonies manually if you don’t play guitar. However, your guitar chords need to be super clean, otherwise you end up with unintended harmonies that can mess up your performance.

Among the many other features on this TC Helicon Harmony-G XT are pitch correction, voice doubling, compression, EQ, and de-essing.

The Roland VT-3 is a great vocal effects processor for the money.

Being a Roland, the device does what it promises and the build quality is typically robust.

As the name itself suggests, this VT-3 basically transforms your voice into many cool and fun sounds.

It has options for auto pitch as well as different effects like scatter, reverb, robot, and megaphone. You can also use it to transform male voices to a female tone and vice versa.

In fact, the VT-3 is a supremely versatile device, being a vocal effects processor, vocoder, and synthesizer all in one. 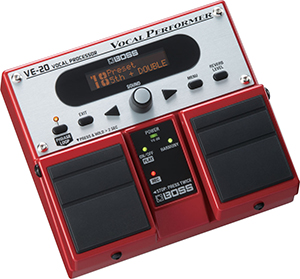 Along with TC Helicon, BOSS sets the standard in the vocal effects processor trade. BOSS is itself a subsidiary of Roland, which is a company renowned for high quality music instruments.

As long as you know what you want and how to do it, there is no limit to what you can do with the Boss VE-20.

It has options to tweak your voice in many interesting ways and is remarkably easy to use, even for beginners. There are also onboard editing tools for experienced users.

Marketed as a stompbox made with vocalists in mind, this vocal effects processor auto corrects your voice’s pitch and instantly adds body and a myriad cool features to completely transform your vocals.

You get the standard reverb, double track, chorus, and delay effects and a whole host of not-so-common ones like strobe, radio, chorus, and distortion.

Anything over $500 should rightly be considered high-end for vocal effects processors.

And to avoid any buyer remorse, if you are going to be spending such amounts on a vocal effects processor, you better make sure it’s on a trusted brand. They don’t get much better than TC Helicon.

This TC-Helicon VoiceLive 3 can store up to 500 harmony presets, which is more than the average musician can realistically go through.

On top of that, it has adjustable pitch correction and all the effects like reverb, echo, delay and others you find on the other TC-Helicon models and two new ones in vocoder and synth.

The vocal effects processor, like others in the VoiceLive series, has inputs for both guitar and vocals. You can even program it to render multiple effects for both voice and guitar at the same time.

And Our Pick Is…

The Behringer Virtualizer 3D FX2000 is a real steal for all it does. It is not a terribly bad place to start if you are a newbie at vocal effects processing.

The Roland and the Boss VE-20, as you should expect for Roland products, are very well made pieces of equipment. You aren’t going to find too many flaws in them.

But for the most bang for your buck, I have to agree with the many people who have bought and reviewed it so favorably and recommend the TC Helicon VoiceTone Harmony-G XT.

The build quality is solid. And the voice/guitar functionality, range of effects, and the manual and guitar generated effects options all make the price look too good to be true.

There are a lot of worthy upgrades in between, including the Boss VE-20.

But for a true upgrade, you have to spend a few hundred dollars more and get the TC-Helicon VoiceLive 3.

Right, are you ready to transform your voice and up your game on stage?

I’m Patrick, Head of Product Research at Voices Inc. My passion is to research musical instruments and courses, and write in-depth product reviews. I will be thrilled if this website can help you decide which brand and model of musical instrument is right for you.