Gibson and their relationship with Epiphone is a well-known story by now.

The former is one of the biggest names in the business, while the latter was created with a sole purpose of producing affordable models of famous Gibson guitars.

It used to be that Epiphone was nowhere near Gibson when it came to quality. These days, the situation is a bit different.

How close are these guitars in terms of performance and build quality?

Are they even comparable, and if so, which one is better?

Answering these questions requires us to go deeper take a detailed look at each instrument.

Battle of The Hummingbirds – Which One Is Better? 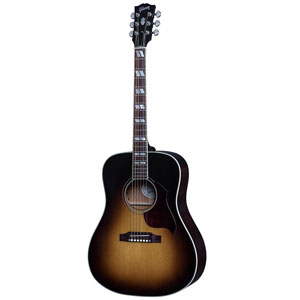 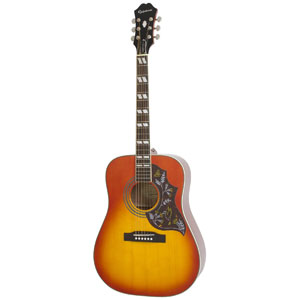 There’s one thing you need to know right off the bat:

Gibson’s Hummingbird Pro is going to be made of much finer materials, and include a better quality electronics.

Both Hummingbirds look more or less the same from a distance, however the level of detail and craftsmanship comes into full view once you get closer.

When one guitar costs about ten times as much as the other, you know that build quality is going to be very different.

With that said, it’s still informative to look at each Hummingbird Pro individually, see how they are made, and what type of tonewood is used. 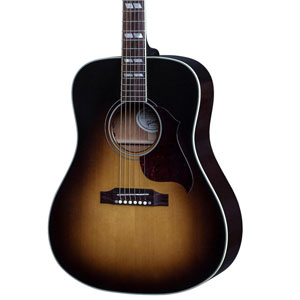 Gibson’s Hummingbird Pro is a fully handmade guitar. Their luthiers take care of everything, from a very intricate hand-scalloped top bracing to fit and finish.

Gibson left nothing to chance, which is normal considering the Hummingbird is one of their oldest lines of acoustic guitars out there. The tonewood of choice came down to a solid Sitka spruce top combined with solid mahogany back and sides.

They went out and chose the finest tonewood for this occasion, ensuring a superior sound to the finished product.

Quality materials don’t only extend to the body of the guitar.

The inlays on this Hummingbird are made of actual mother of pearl. Installing these can be done in several ways, but only ensures that the inlays will fit the fretboard like they were always there.

In order to do so, a luthier in charge needs to spend a lot of time and effort to file everything down and not leave a mark. While this is just one detail, it speaks volumes about the level of craftsmanship and overall quality control involved with these guitars. 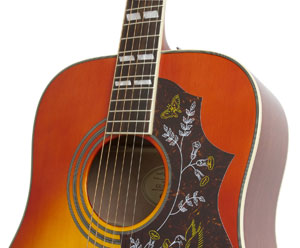 Epiphone's Hummingbird Pro is a complete contrast to the Gibson one.

Unlike the original Hummingbird Pro, this one is a serial-made guitar. In other words, you're looking at a mass-produced acoustic guitar that hasn't seen any special attention from a luthier.

Affordable usually doesn't go well with hand made, which is normal. Epiphone did a great job at replicating Gibson's design and solutions.

For example, they used the same type of tonewood - Sitka spruce and mahogany. They also used solid pieces for the top, back and sides, which is always a plus.

However, the difference in craftsmanship is obvious. These two guitars might look the same, but you notice a significant difference as soon as you pick them up and strum a chord.

As you probably know by now, these Hummingbird Pros are acoustic electric guitars.

The difference between Gibson's and Epiphone's Hummingbird Pro is the type of electronics used.

Gibson went with a much more refined L.R. Baggs Element VTC acoustic pickup system. This a preamp which uses an under-saddle pickup, and while that doesn't sound so impressive, it's worth considering that the performance you get from this system is cutting edge.

What L.R. Baggs Element VTC acoustic pickup system is capable of delivering has previously been considered impossible for an under-saddle pickup configuration.

One the other hand, the Epiphone opted for a much more affordable Shadow ePerformer Preamp.

Don't get me wrong, Shadow is a great company and their preamps are nothing to joke with, however they belong in the average category. Their performance is great, but it's nothing you'd want to write home about.

When it comes to sound, comparing a high-end Gibson guitar with an affordable Epiphone one is anything but fair.

Gibson outperforms its competitor by several orders of magnitude.

It simply offers more warmth, incredible projection and overall a long list of subtle and not so subtle differences which go in favor of Gibson.

With that said, Epiphone's Hummingbird Pro is a great guitar, hands down.

Which One Is Better?

This was never really a question:

Gibson is better in every single thing other than price.

If you had the money, we will always tell you to go with Gibson, period. However, if you are on a budget, Epiphone's Hummingbird Pro is exactly the type of guitar you'd want to have.

So at the end of the day, Gibson is better overall, but Epiphone dominates the affordable range.

The comparison I did here was purely done out of curiosity.

While the winner is clear as day, there's one thing which we have to mention about Epiphone: The quality of their instruments just keeps on improving.

They are already at a point where the gap of quality is getting smaller and smaller. Given enough time, we are certain that Epiphone can reach Gibson in terms of quality. That is unless Gibson brass pulls the plug and locks Epiphone off the high-end stuff. It's more than possible, but who knows what the future brings.

Either way, Epiphone is no longer looked at as the 'knockoff Gibson', they are way past that point by now.

Bang for the buck, Epiphone is slowly starting to dominate every market they are in.

Buy Online and Save

Both of these guitars are available online where you will find the best sales prices.

Below are links to both Amazon and Musician's Friend. Depending on your geographic location, the links will open with the best sales prices for you.