He shocked the world with his effortless transition from boy-band sensation to a mature solo superstar. Not to mention his great superbowl performance in 2018.

Our jaws dropped again when he began building his acting career, and was actually good at it.

And he surprised everyone-including himself- when he won his first Academy Award, not for a song about “misery and self-loathing”, but an infectious number that gets people up and makes them dance.

With all the surprising elements that makes up Justin’s magic, how do you narrow down what’s working for him, so you can replicate some of his awesomeness?

We’ve highlighted 3 simple ways you can be inspired by Justin’s singing and performance, and some practical tips to get you to Justin-level awesomeness.

What Makes Justin’s Singing So Awesome?

Justin shows great versatility not only in the music he produces, but in the various ways he uses his voice.

Think about the difference between his Oscar-winning Can’t Stop the Feeling, and 2006’s Rick Rubin - produced (Another Song) All Over Again.

Not only are the stories and “feel” of the songs opposites, but we are able to hear the great variety of tones Timberlake can express.

In (Another Song) All Over Again, he is at the lower end of his register, his pleas are gentle and smooth, with subtle and elegant vocal runs that add to the pathos of the ballad.

In his dance-hit masterpiece Can’t Stop the Feeling, on the other hand, his voice is strong, clear, and bright. Even when he reaches into his falsetto on the chorus, it’s a full-bodied falsetto that matches the high energy of the song.

Justin’s versatility also shines in his agility as a singer. His voice is limber, capable of nimble vocal runs and smoothly transitioning between registers.

No discussion of JT’s vocal chops would be complete without mentioning his enviable falsetto voice.

Justin is heavily influenced by both Michael Jackson and Prince (so much so that he dedicated his 2016 Concert film to The Purple One), so it comes as no surprise that his vocal stylings would emulate these masters of pop.

Both singers were known for their falsetto vocals, and Timberlake is no different.

He has a strong falsetto voice, but note how even when singing in the falsetto range, he still shows a lot of versatility: in Cry Me A River, his falsetto is light and airy. In Like I Love You, it’s bright and metallic.

Jonathon Demme, director of Justin Timberlake and the Tennessee Kids, called Timberlake “a funky Frank Sinatra”, and no wonder. The two triple-threats have more than baby blue eyes in common. They both have undeniable star quality: you can’t take your eyes off them whether they’re acting, dancing, or singing.

For Timberlake, he has expanded upon that raw star quality to create a brand of performing that is energetic, passionate, and highly polished.

Of course, JT is known for his precise and nimble dancing, as seen in this live performance of Suit and Tie. His performance is so rehearsed, it looks as though his body has taken over and he doesn’t even have to think about the fantastic performance he’s delivering.

Compare that to his impassioned and playful duet with Chris Stapleton at the 2015 CMA Awards. This performance is more casual and less choreographed, but his movements are still exact and energized.

No matter what the style of his performance, you can be sure JT will give it his all. 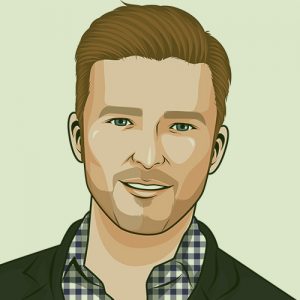 You don’t have to be a lyric tenor, like Justin, to be inspired by his singing.

Of course, if you do share the same vocal type, he is a great inspiration. But there’s a lot Timberlake can teach us, no matter your vocal type.

Justin is known for his easy use of falsetto, so if you want to channel his style, work on improving your falsetto range.

Don’t be intimidated if you haven’t sung in your head voice much, or if the first time you try, all that comes out are squeaks. You’re just using a new part of your range.

With consistent practice, you’ll awaken that part of your voice and those high notes will begin to sound a lot smoother.

A great exercise to awaken your falsetto range is the “Siren Song” found here. When you’ve played around with this exercise and are ready to go further, consider working with a vocal teacher to explore this new area of your voice. Find out more here.

Remember what is physically happening when you sing high notes: your vocal cords become thin and stretched out.

For that reason, it’s important that you warm up your voice every day to create limber vocal cords and a relaxed instrument. Relaxing your tongue, jaw, neck and shoulders is important for every singer, but especially when you are trying to sing in falsetto.

To get started warming up your voice, click here.

We love Justin for his songs that make us want to get up and dance, but that’s not all he has to offer. His catalogue includes sweeping ballads, bitter break-ups songs, as well as a slew of genre-defying hits. But it’s not only the variety of types of songs that make his albums so interesting.

Timberlake exhibits great control and versatility in his singing, and as such, he can create many different “flavors” with his sound.

To learn to be as versatile as Justin, begin experimenting with different placement while practicing your vocal exercises or rehearsing a song. Try singing the same note through a nasal placement, in your head voice, or a full-bodied chest voice. It’s amazing how different the same note can sound when sung in different ways!

To begin exploring different placement, try this “Nasty Nay” exercise to wake up your nasal resonators. When you’re ready to go further, ask your vocal teacher to help you discover different vocal placements.

Remember, there’s no “one right way” to place your voice to sound good. If anything, it’s great to have many placements in your bag of tricks, so you can have as much versatility in your voice as Justin!

You don’t become a master performer overnight. But if there’s one thing we can take away from Justin, it’s that the more thoroughly you prepare, the more magical your performance will be.

Remember how I mentioned that Justin’s body almost seems to take over when he dances? That’s the effortlessness you are going for.

Of course, we know the more “effortless” something looks, the more effort has gone into preparing it!

You don’t have to be a Michael Jackson-level dancer, like JT, to deliver a great performance. Read this article to start taking your performance skills to the next level. Just remember, whatever your style, that preparation is your friend!

Justin Timberlake has been a professional entertainer for almost his whole life: ever since he performed on The New Mickey Mouse Club as a youngster.

As such, he has a lot of practice.

Make it a priority to both warm up and work out your voice at least five times a week.

Even simply doing a five-minute warm up, followed by 15-20 minutes of vocal exercises, will strengthen your instrument and give you more control over your voice.

If you really want to improve your technique, consider working with a trained vocal teacher. Justin shows not only great versatility and control, but also stamina (think about all that singing-while-dancing!) Working with a vocal teacher on a regular basis will build up all those skills.

If you don’t have a vocal teacher yet, you can click here to find an online instructor that we recommend.

Just think about not having to wonder how to get better. You’ll be able to know exactly what to do to improve your voice, because you’ll be working with an expert, and from the comfort of your own home.

Get Ready to be Surprised

We said that Justin Timberlake is the master of surprising the world with his never-ending skills. (Seriously, is there anything he can’t do?)

When you break it down, though, Justin’s success isn’t so very surprising. It comes down to great technique and precise planning, both the result of a lot of dedication and hard work.

And now you have the tools to do the same thing: by working that falsetto voice, adding variety to your tone, and perfecting your performance game, you can reach your own level of Justin Timberlake-inspired awesomeness. You just need to put in the work.

Do that, and I suspect you’ll surprise the world just as much as Justin does.