There’s hardly a better feeling than adding a new, original song to your repertoire.

Unfortunately, the process of writing a song can be painstakingly difficult.

But what if I told you that it doesn’t have to be so hard?

What if there were some simple ways you could improve your songwriting and start writing great songs with a little less blood, sweat, and tears?

In this article I’ll share 6 pro tips to help you write better songs as well as some online tools designed to help improve your songwriting on guitar.

Recommended Course: If you are interested in taking your songwriting to the next level, there is a full course dedicated to helping guitarists.

1. Start by Playing Other People’s Songs

You can’t expect to write great songs without learning to play some covers.

The same is true for writing songs on the guitar:

If you don’t take the time to explore other people’s music, chances are you’ll struggle to make your own.

By learning to play other people’s songs, you’re subconsciously learning the very basics of songwriting.

As soon as you’ve got a few covers under your belt, you’ll start to notice patterns about song structure, melody, lyrics, and more.

After some time, you’ll come to see how professional songwriters use these tools to write the classics you love and adore.

Learning covers is also a great way to take some of the pressure off yourself to write the next chart topping hit.

Most songwriters have found themselves in a place where, no matter how much they try, they just can’t piece together the kind of song they want to.

While it’s important to plough through these tough moments, taking a more passive approach can be just as effective.

Instead of forcing out a melody or chord progression, try to put your idea aside and go back to learning some songs you really love.

This will help you shed a load of pressure and you might just stumble upon a lyric, chord, or riff that you find inspiring and can tweak or modify for your own song(s) later down the track.

You don’t need to be able to read music and remember all the notes of every scale in order to write great songs.

In fact, some of the most successful musicians in the industry have openly admitted to not being music theory geniuses, including Lionel Richie, Dave Grohl, Michael Jackson, and The Beatles.

But, having a basic understanding of songwriting theory will allow you to understand what’s going on in the songs you love.

You’ll likely start to understand the basic theory behind songwriting by simply learning to play covers.

However, try to take things a little further by researching some basic theoretical concepts like scale degrees, diatonic chords, the circle of fifths, and chord inversions.

Again, you don’t need to become a theory wizard to write great tunes on your guitar, but by researching some of the above concepts you’ll get a better understanding of the foundations of songs and how you can use/modify them to get your message across.

A course I love to recommend for guitar theory is: Music Theory Square One at JamPlay.com

One of the most iconic pieces of advice for writers comes from William Safire, an American author, journalist, speechwriter, and New York Times columnist:

Cliches take meaning away from powerful messages by dressing them up in a way that makes you cringe.

To make sure your message doesn’t get lost, try to avoid cliches as much as possible in your songwriting.

This will help you transmit a feeling that’s honest, pure, and heartfelt, no matter how simple your message might be.

Remember, music has existed for thousands of years, which means whatever you’re singing about has probably been done before.

And there’s nothing wrong with that. But in order to make your message stick, you’ll want to do your best to find a unique way of sending it.

4. Experiment With Alternate Tunings and Break Out of the “Norm” 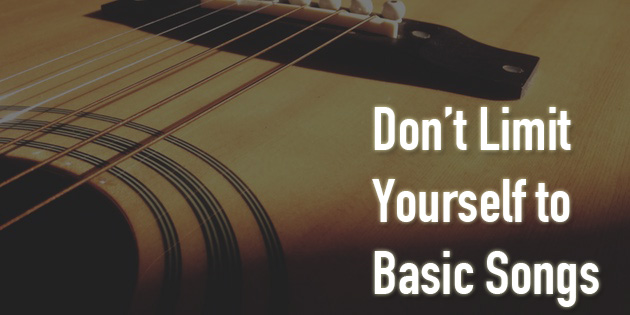 A great way to start writing better songs is to break out of “the norm.”

But how do you do that when we just told you that most things in music have already been done?

Well, a great place to start is to use alternate tunings and chord voicings on your guitar.

Sure, learning basic open and barre chords is essential for any guitar player, but using those chords repeatedly quickly gets boring.

Using alternate chord voicings and tunings allows you to find new, interesting ways to play even the most basic chord progressions.

In fact, arguably some of the biggest guitar songs were written using open tunings, including Brown Sugar by the Stones, I Want You by The Beatles, and ZZ Top’s Just Got Paid.

Exploring an open tuning takes some of the monotony out of playing the guitar.

Experimenting with new tunings and chord voicings allows you to break down that monotony and ultimately write better songs.

5. Write and Record to Keep Track of Your Ideas

Even the best ideas can be forgotten.

How many times have you find yourself whistling a great melody or fussing over an awesome lyric, only to find you’ve forgotten it when you finally sit down with your guitar?

To avoid this in the future, make sure you carry a notepad or recorder with you wherever you go. This allows you to capture an idea right when inspiration hits and come back to it later.

Thanks to modern technology, most people have a simple notepad and recording app on their phone.

Make sure to use these simple tools to your advantage and start capturing your best ideas no matter where you are.

6. Use the Internet to Improve Your Writing

In today’s digital age, we have a world of information at our fingertips.

Whether you want to learn how to write poetry or how to make BBQ ribs, all it takes to get the information you need is a quick search on Google or Youtube.

Similarly, the internet is literally full of great tools to help you improve your songwriting on guitar.

Sites like RhymeZone and MasterWriter, for example, offer a wide variety of tools that can help you craft great lyrics.

Youtube, on the other hand, is packed with live performances from a wide variety of artists which you can watch and learn from.

To step up your songwriting game, try to use these sites productively to influence and improve on the way your write and compose songs.

Found a song with a great chord progression, for example? Find a live version of it on YouTube and pay attention to how the artist plays it and try to replicate that.

This 10-week course is designed to help songwriters of all skill levels understand the most crucial songwriting and composition skills.

It explores both the most important aspects of writing music as well as the daunting world of lyrics.

Regardless of your skill level, JamPlay’s Simple Songcrafting is sure to help you better understand songwriting and ultimately start writing better songs on the guitar.

Learn more about this course on the official website: JamPlay.com