These days everything is becoming wireless, would you agree?

Even though wired systems are still generally considered to be the standard, wireless technology is making its way into the music and entertainment industry.

What took so long?

Well the whole issue with early model wireless systems was the cost of creating a package that small, that was also efficient at the same time.

Nowadays we don’t have to worry about that.

Technology has advanced to a point where we can get complete wireless microphone systems in a compact package, at a price point that doesn’t only make them affordable to rock stars and big name artists.

I have reviewed three of the best wireless microphone systems. All three of these offer the kind of performance you would need for a serious gig, all while not breaking your bank account.

You might disagree with my picks here, but we do all have our own set of requirements when dealing with this type of equipment. I personally feel this list is great for most people.

With that said, let’s get right into it and see what these packages offer. 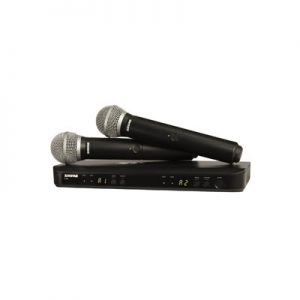 One quick glance at the Shure BLX288/PG58-H9 Wireless Mic System reveals that ease of use and functionality were the main design goals with this model.

For these types of products, I think that's a pretty big deal.

Aside from making some of the best dynamic microphones you can find at the moment, Shure has been busy designing the next generation of mid-range wireless systems.

The core of the model we are looking at here is the Shure BLX288 receiver.

When combined with two PG-58 microphones fitted with wireless transmitters, you get a complete system that delivers consistency and precision which makes it one of the best on the market at the moment.

Let's start by taking a look at the receiver.

BLX88 is the most advanced model from the BLX family of receivers. This unit comes with support for 12 systems per frequency band, which naturally depends on your region.

In order to keep the signal going with your transmitters, BLX88 is outfitted with two antennas which are controlled by a microprocessor. This type of setup ensures that you will always be using the antenna that has the optimal signal with the transmitter, along with jumping to a channel that has the least traffic.

The unit itself is pretty sleek and comes with two LED indicators on the front, one for each device. The range of these receivers is claimed to be around 300 ft, but pushing that far out would probably reduce the quality of the signal.

Speaking of which, the transmitters are as solid as they come. Two Shure PG58-H9 microphones with matching transmitter units ensure that you will get the best possible tone quality on the other end.

PG58s need no special introduction as they are among the best cardioid dynamic microphones you can get at the moment.

As I mentioned above, ease of use and functionality come first.

This unit also has great range, and the signal remains strong as long as you have a visual line of sight with the receiver.

The range is more than enough even for larger stages, which is what matters the most.

Overall, this is the best mid-range wireless microphone system you can get at the moment. 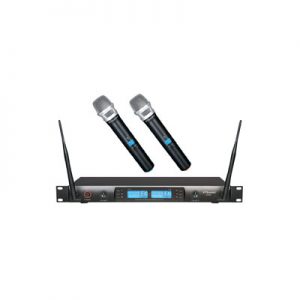 Some old school sound engineers who've been working the stage for a while might roll their eyes at a wireless system in this price range, but the fact is that you no longer need to spend a fortune just to get some decent performance.

The GTD Audio G-622H is a perfect example of what a good entry level wireless setup should be like.

GTD focused on bringing the core performance that was on par with modern requirements, although the rest of the deal looks great as well.

Awesome Range with Lots of Frequencies

Similar to the Shure I've talked about above, the GTD Audio G-622H is a dual wireless system that comes with a decent receiver and two microphone-transmitter combos. The receiver unit is a very nicely packaged model that sports two antennas and two LCD displays for each transmitter.

The whole enclosure is designed for rack mounted setups, making this perfect for stage use.

When it comes to what this setup can do, things get even better.

There are over 100 frequencies for each channel, supported by an automatic frequency hopper that picks the least occupied bands. The range is claimed to be 500 feet, although that might be a stretch.

Let's just say that you won't have to worry about your sound.

For such an affordable model, the GTD Audio G-622H works like a charm.

With that said, there are some things to consider:

You will get the performance that is more than adequate for serious use as long as you don't push the whole system to its limits.

When in visual range of the receiver, at 1/3 maximum distance, signal quality is perfect and so is sound quality.

If you are on a budget but still want a decent unit, this is the go-to model at the moment.

When the budget is tight but you need to get rid of those cables, the PylePro PDWM3375 is about as cheap as you would want to go.

In all honesty, this little setup is pretty surprising and packs a decent punch. It's somewhat limited compared to the previous two models I've mentioned, but it still gets the job done.

Let's take a look at what makes the PylePro worth considering.

Simple Features and a Low Price

That's what's inside the box when you purchase a PylePro PDWM3375.

The receiver itself is simple as it can be, which is not always good, but we can't really complain considering the price.

The unit requires manual input of channels and frequencies, so it takes some effort to setup properly. With that said, the range on these is about 150 feet, which is a bit low, but still acceptable for smaller venues.

The quality of the microphones is not the best, but it's more than satisfactory.

Save Some Money, But Keep Expectations On Point

In terms of performance, you get great value for your money.

It's not the type of system you would want to use on large stages, but then again you can't get much better at this price.

Sound quality is good, and the signal stays more or less intact as long as you are within visual line of sight with the receiver.

Overall, it's a great budget solution for those with realistic expectations.

Our 3 best wireless microphone systems cover the entry level to mid-range users who need performance at a reasonable price.

While they might not be packed with bells and whistles, all three of these models deliver an acceptable core performance at the least, and an optimal one at best.

Whichever you choose to go for, keep the price and expectations in mind.

Use the table above for the best prices online, as I update it regularly.