Learning the piano is a lot of work!

When you’re just starting out, there’s room to learn and grow.

Unfortunately, most beginning pianists make a lot of mistakes when it comes to playing and practicing.

I’ve listed 17 of the most common mistakes that beginners make when learning the piano, plus ways you can avoid making them.

Do you do any of these?

Read on to find out!

Free PDF: Download The 7 Easy Ways to Stay Motivated With Piano by clicking here, and learn about the easiest way to make playing piano fun again!

This is one of the biggest beginner mistakes in the book!

It doesn’t feel natural or necessary.

In fact, this might not affect much when you’re first starting out, but:

It will make a huge difference when you get to harder songs!

Get in good habits now.

2. Assuming the Clefs Refer to Hands

With a few exceptions, this is how you can determine which hand plays what.

Clefs, however, denote which octave you are playing, not which hand you are supposed to use.

Notes and keys are not the same things.

Notes can take many forms and be written many ways!

The easiest key to play songs in is C major.

After all, you don’t have to bother with sharps or flats much at all in the key of C!

However, most songs in the world are not in C.

You also will want to learn to transpose songs into other keys to match your voice range.

Learn to play in G and D, to start, and then move on to all the other keys.

5. Thinking Sharps and Flats Have to be Black Keys

This is usually the case.

However, B sharp is a white key! So is F flat.

They are an essential part of learning to play the piano.

You’re going to have to learn them eventually if you want to become even moderately proficient at the piano.

Practice them to improve your dexterity as well as your ability to sight read and play in various keys.

It might seem awesome when you’re sitting at the keyboard, but it doesn’t sound very awesome.

Many songs are written to be slow, and they should be played that way.

Make sure you are counting and using a metronome to keep your tempo right.

8. Not Playing the Music

Everyone knows that you should play the right notes in the right rhythm, but what about everything else on the page?

Staccatos, crescendos, and changes in volume should be noted and followed.

You can’t ignore this!

Everything about the music is essential, so make sure you pay attention to dynamics.

9. Getting Frustrated by Slow Progress

You can’t learn piano in a day.

You can’t even master the piano in a year!

Learning to play the piano is hard work, and it’s slow going.

However, anything that is worth learning will take time. Be patient, and don’t give up.

Everyone needs a break now and then, however:

It’s best to schedule in breaks rather than randomly skipping days or playing for only a few minutes at a time.

Playing piano for other people can seem scary!

I used to get sweaty palms and feel panicked every time I had to play for anyone. I had a tough time doing it even after I had been playing for over a decade!

I overcame my fear of performance by playing in front of other people—a lot.

If you are learning an instrument, share your gift of music with others!

The more you do it, the easier it gets.

12. Playing Music on the Wrong Level

Sometimes, that new pop song you love is only available in intermediate level.

You can totally play that if you work hard… right?

Well, maybe, but is it a good idea? Not at all!

Stick to the level you’re on, and you won’t get frustrated or build bad habits.

This is true for easy songs, too.

If you only play songs that are easy for you, you’ll never get any better.

You know how kids in your elementary school art class used to mix up the watercolors?

All the watercolours ended up being blended together until they were brown.

That’s how it sounds when you use too much damper pedal.

For now, stick to using the pedal when it’s written in the music, or just use it to join phrases.

14. Playing Rather than Practicing

Playing and practicing are not the same thing!

When you sit down to practice the piano, it should not sound pretty.

It should sound like you’re breaking down songs and working on them, bit by bit.

This is the way to get better.

You should be counting out the beat of a song before you practice.

Then use a metronome while you practice.

Rhythm is just as important as the notes.

16. Forgetting to Record Yourself

Do you actually know how you sound?

Unless you record yourself, you might not realize that you slow down and speed up randomly through a song, or that you play way too loud!

Record your playing so that you can hear what you need to work on and measure improvement.

Despite the ads you see on the internet, piano is not something you can teach yourself.

You might learn how to pick out “Mary Had a Little Lamb,” but you’ll likely never play Bach or Elton John.

If you can’t get a live teacher, no worries!

There are plenty of online lessons out there.

I love Playground Sessions, which is an online program that teaches you to play step-by-step using songs you love.

There you have it—the most common piano mistakes made by beginners!

Want to Stop Making These Mistakes?

Write down the ones you struggle with and keep them on your piano!

You can also sign up for lessons. This will teach you good habits and break your bad ones.

You can find our full review of Playground Sessions here to learn more about this awesome program!

Say goodbye to beginner mistakes and hello to new improvements. 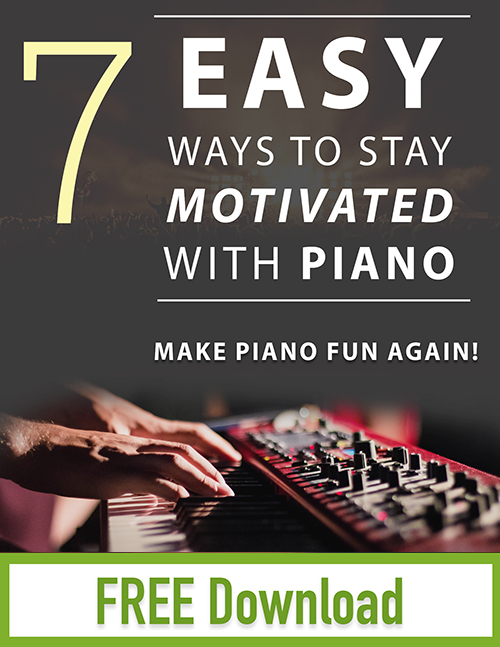 I’m Breana, long-time piano player and casual guitar strummer. I grew up on Moezart and the Beach Boys, and I love all types of music! My day job is writing, but I moonlight as a piano teacher and occasionally play for events.