We’ve all seen those guys on the college quad.

They strum hard on their guitar, garnering small crowds of sorority girls and guys in tank-tops.

We can all agree that these folks are not the ideal image of a guitar player.

In fact, they are the end of rock n’ roll as we know it.

What if I told you that no matter how big of a crowd of giggling 19-year-olds they garner, their music career is going nowhere short of seafood bars and cruise ship gigs?

I’ve compiled a list of songs everybody wrongly thinks will teach them how to play guitar.

Not only because these songs make you look like a tool, but because they were written with the least-common-denominator in mind.

Read on to discover songs to avoid, songs to consider, and some information on tools to use to put you on the right track.

Free Bonus: Download The Insider's Guide to Online Guitar Lessons, which is a 71 page resource guide covering everything you need to know about learning the guitar online.

Let’s start with some of the songs you should definitely avoid.

Then we’ll get into some better ones.

Today is gonna be the day I’m gonna give myself a hernia.

What made Oasis brilliant was not their chord progressions, nor was it their beyond-basic strumming patterns, it was their use of texture and authentic attitude.

Most new players like “Wonderwall” because it requires little movement in their left hand. When you resign yourself to playing this tune, though, you doom yourself to lazy playing.

Do yourself a favor and forget the late-90s, please.

2. Smoke On The Water

Deep Purple is arguably more worthy than Oasis, but this amateur favorite presents a similar problem to “Wonderwall.”

Most will learn this tune only on the first string, sliding a single finger up and down the neck to strike the notes.

That’s not a solid foundation in guitar. Instead, try this:

Focus on songs that engage all of the fingers and at least three of the strings.

No one will argue that Metallica writes complex arrangements and acts as a figurehead for generations of metal-heads and rock fans, alike.

But when someone picks up a guitar and plays the first few notes of “One” only to stop right there and beg for applause, they’re doing nothing more than expressing their own apathy.

A riff is not a song.

If you can’t play the entire song, you have no business playing it.

No, you’re not experiencing déjà vu.

I’m talking about a different song by the same name.

Like Oasis, U2 made its name not with chord progressions, but with pedal effects.

Learning to play this anthem will do nothing more than teach you how to play your little Alvarez too loud in an attempt to mimic the sound of Edge’s extensive pedal board.

Made famous first by Outkast and later by an early YouTuber, this is a tune I would usually get behind, but there’s a problem with trying it too early:

If you’re just learning how to play guitar — sorry, but you’re rhythm is not yet tight enough to play hip-hop.

I’m not saying to not give it a try! Pushing yourself is good.

Pushing yourself, failing, and settling for failure — that’s not going to help you progress. Wait some time before you try this one.

You’ve probably noticed that the defining characteristic of all songs I say you should avoid is this:

Either the instrument or the skill level is not appropriate for the music.

Instead, try these songs:

Songs written for acoustic guitar, songs with complex, yet accessible chord structures, and you will open all the right doors in your guitar education.

Rhythmically, it will train your right hand in syncopation.

Play America’s 70s hit and transform all those bright-yellow tanks to paisley ponchos.

A full detailed lesson of this song is provided by Tom Finch at GuitarTricks.com. 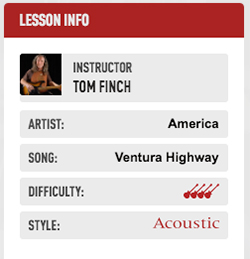 I know that I spoke ill of the late-90s earlier, but this song holds a dear place in my heart. It was the first I ever learned.

Incorporating four basic chords over a repeating arrangement, Blue Traveler’s radio favorite is the perfect song for jamming into your own, personal groove.

Anders Mouridsen gives a full lesson breakdown of this song over at GuitarTricks.com. 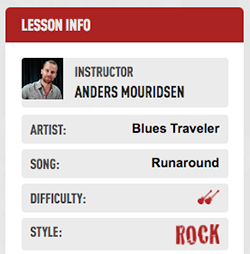 Say what you will about the Goo Goo Dolls. These guys knew how to use an alternative tuning.

I cannot recommend this song enough to a new player.

Get out of standard tuning and explore all the sprawling sonic landscapes your instrument can take you.

For the record, you will tune your guitar to B D D D D D. Wild, huh?

This song lesson is available from one of my favourite guitar instructors at JamPlay: Mark Lincoln.

Fingerpicking: an elusive tool every guitar player should have at his disposal.

Tracy Chapman’s touching story of a couple trying to escape poverty will not only leave your audience stunned, it will introduce you to the magic of fingerstyle guitar.

From there, check out Travis Picking techniques and begin your journey into a largely overlooked corner of guitar culture.

5. Blister In The Sunday

A song to rock out to!

This tune was written by the Violent Femmes to break your strings and get a crowd boppin’.

Use it alongside “Fast Car” to contrast the quiet and loud textures at your disposal.

The acoustic guitar is more versatile than any college douche would lead you to believe.

By ditching the traditional beginner songs and opting for more complex numbers, you will ready yourself to use the instrument to its greatest potential.

Identifying which songs to learn is only half the battle:

Check out this list of 10 easy guitar songs for beginners.

Bob Barrick is songwriter, poet, and content creator. He has been playing guitar since he was thirteen years old and has a passion for sharing his guitar knowledge.